Optus Digital has been working with SureSet since July 2015 and is probably one of the best examples of the spectacular results a well-executed digital marketing strategy can bring.

SureSet is the UK’s leading manufacturer of permeable resin bound paving and has been operating since 1997. Today they operate all over the country and have earned several awards, establishing themselves as leaders in their industry.

The relationship was three-way with Sureset UK’s CMS developers and although this has at time created lag time between our vision and its realisation, the website has heavily benefited from a well-rounded digital marketing strategy.

The website, since its SEO re-launch in June 2015, has seen large improvements from both Desktop and Mobile Organic Traffic, as well as greatly growing the number of Conversions from each user.

SureSet UK traffic since its website relaunch in June 2015

This came from some great progress in rankings for some of the top keywords in the industry. In this regard, SureSet has been comfortably outranking all competitors in the resin bound paving sub-market. Particularly, the website is now ranking in the top positions for some of the highest converting keywords such as “patios” and its related terms, or “driveway paving”. 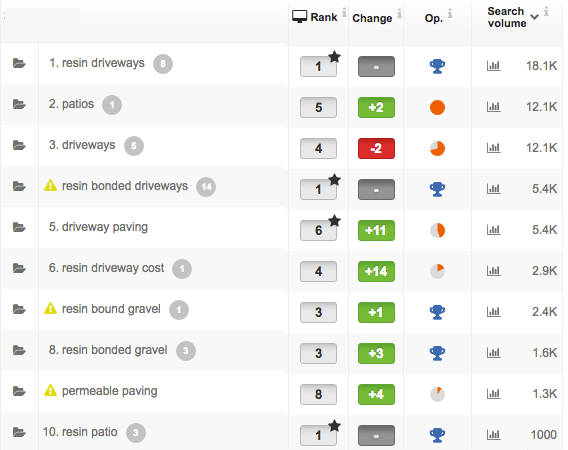 This investment and efforts have resulted in an increase in conversions, which is what any sensible marketing strategy focuses on. With a stable, high conversion rate of above 10% of total traffic, the improvements made demonstrate a great quality of traffic coming to the website.

After some great advances from a technical standpoint in late 2017, SureSet has also seen some incredible increases and started 2018 very strong with a 69% increase YOY for the first third of the year:

The second source of traffic and enquiry for SureSet is their Pay Per Click campaigns and more specifically Google AdWords, which has increased YOY for the 1st quarter of 2018 from 10.6% to nearly 20% of their overall conversions… with relatively the same budget!

This came from on-going optimisation of all elements of the PPC campaigns. Weekly Search Query reports are conducted and closely analysed by our team, which allows us to list every search term SureSet ads have appeared for. Using this we are able to identify which keywords are performing well, which should be added to the negative keyword list, or discover new terms we should be bidding for and for how much.

For instance, we experimented with SKAGs (Single Keyword AdGroups) to have more control over their two most targeted keywords : [Resin Driveway] and [Garden Paving]. This allowed us to easily see how valuable these exact keywords are to SureSet and reduce cost of acquisition over time.

This has enabled us to achieve some impressive results for non-branded terms:

Plans for the future

Although the results we have seen for the website are very satisfying and have successfully established SureSet’s UK presence online, we are always trying to take things to the next level.

This is why we recently agreed on the rebuild of a new website for SureSet UK which will be ready later this year! Using a more SEO friendly CMS will give us full control over every element to kick this up a notch.

As we’ve mentioned before, the website is ranking very well for national related terms. But with the new website and growing ambitions for what’s possible, we are now planning a strategy to also target local terms for SureSet to rank for.

All very exciting projects in the pipeline!

If you want to take your online presence to the next level, get the traction and results you know you can get, get in touch today!