Rush UK are a trampoline park franchise with two locations in Birmingham and High Wycombe. Their indoor trampoline parks are huge attractions in their respective cities. Not only are they a great venue to trampoline freely with their massive open courts but they also have trampoline assault courses, fitness classes, dodgeball courts and so much more. Trampoline parks have grown massively popular in the past 5 years in the UK and so has the competition. What this means is that all the different trampoline parks are competing against each other for the same potential audience. With this in mind, and given the rapid expansion of both Rush UK and the industry itself, it was important that Rush UK were positioning themselves well in this landscape and establishing themselves as a go-to place for trampoline fun!

When Rush UK approached us to work together, we couldn’t have been more excited to help them grab a stronghold in this dynamic new sector.

Rush UK wanted to raise their visibility in their sector, improve local SEO for both localities and get more people to book a session at their trampoline parks. Not to mention they also wanted to bring down their bounce rate, which was the biggest challenge because they specialise in trampolines. Ba-dum tss. Puns aside, there were some clear challenges but with Optus Digital at the helm there was an even clearer path to success and we were determined to make this happen.

– Duplication & Technical Problems: The site had been built in a way which split the site into two legs for High Wycombe and Birmingham. This is a tactic which usually makes sense, however the build brought up a lot of problems. The split meant that each subfolder required a page for each of the facilities, activities and separate blog pages were also set up. This is what the crawl map looks like: 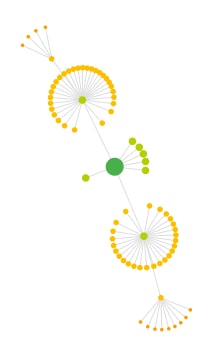 This map is not unusual, however given that most of these pages are not necessary to both crawler and user and because most of the content was duplicate or near duplicate across both subfolders, there were some serious crawl problems that needed to be addressed.

– Content: Most of the site was thin and there needed to be more content for search crawlers to really understand what the site was targeting and what each facility brought to the user.

– Backlinks: The backlink profile was being dilluted by a number of poor links. Hundreds and thousands of links were being pointed from domains which were irrelevant and potentially harmful to the sites authority.

– Unoptimised On-Page: Most of the site did not have optimised page meta data which was specifically targeting a keyword of high importance or relevance.

– Schema and Local SEO: There was little to no local SEO practices in place which would make the site visible for local searches and appear in Google maps listings.

– Site Speed: The site was extremely slow, with large numbers of server calls, massive images and javascript files reeking havoc to the speed. In turn the usability and potential rankings were being hit.

What we Did and SEO Results:

The first port of call was to ensure that the backlink profile was sorted out. We saw that general traffic had seen a massive dip since the discovery of the new links and we needed to mitigate the potential damage that these links had caused. By contacting the sites we were able to get these links removed without the need for a disavow. We then began building up the authority of the site by using content outreach.

Once we fixed this issue, the next battle was ensuring that the site was not being held back by the technical issues that it was facing. We went ahead and deeply analysed the current structure of the site and found ways to bring down the duplication issues using canonicalisation and directives. This meant that the content of importance was still indexable and crawlable but any similar instances were discounted and that the original content would not lose any authority. Then we needed to make sure that the site from a content point of view was hitting all the right targets. This meant doing a complete revamp of all meta data and on-page. We did keyword research to pull out the main terms and started optimising content on site which was not currently meeting best practice.

We then made sure that the site was optimised for Local SEO. This meant adding in the Schema Markup for addresses and setting up business citations online to point back to the original address. We also ensured that GMB was set up for the profiles and finally, we were able to get Rush UK seen for their respective localities. Since, the locations have received hundreds of reviews and any search for trampoline parks within the Birmingham and High Wycombe area will yield results with Rush firmly in the mix.

What did all this work translate to? 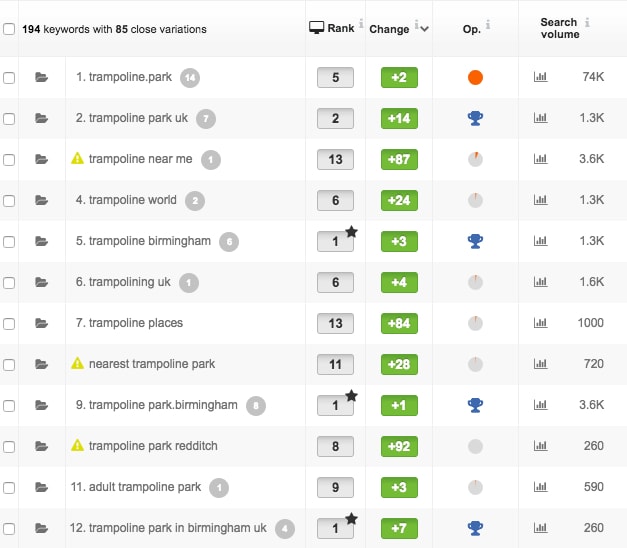 Rush shot up for the locality specific terms and gained a stronghold for most of the Birmingham and High Wycombe relevant results.  In turn, short tail terms also saw massive improvements with Rush even peaking at 1st position for the main term “trampoline park”, which has 74k searches per month.  Google has changed a little and even searches for short term terms can yield local results depending on intent, which means Rush UK can often fluctuate in position for this term depending on a searchers location. However, it is clear to see that the overall authority of the site and improvements to content and local SEO had an overall impact on rankings and visibility.

Visibility increased 27% – what did this mean for actual traffic and conversions?

As can be seen from the screenshot, sessions and new users have doubled and in turn conversion metrics increased by over 200%. This is comparing the earliest possible date for data collection to the latest month which means some of the earlier data may also include SEO and traffic improvements that were performed within that time period.

The main driver was the improvement for the short tail term and with the changes to Google SERP’s, expected traffic shot through the roof.

The industry is still relatively new, and is attracting a lot of new competition who are bound to want to take a piece of the traffic. New trampoline parks and new franchises open often so it’s important to keep on top. Rush UK, with the help of Optus Digital, has carved itself a foothold in the market as one of the top trampoline parks online in terms of visibility and brand awareness.

Over 75% of Rush’s traffic is a direct result of organic and it continues to be one of the most important marketing channels for themselves and companies alike.

PPC Growth and What it Means

PPC, also known as Pay-per-click or Paid search is an advertising model used to drive traffic to a site through ads online either through display, search or social. Given that Paid results appear higher in regular searches, they have a direct influence on search behaviour and results. This method is a highly effective way of driving relevant traffic to your site, if done correctly.

The model is slightly different to SEO, working on the CPC (cost per click) model, whereas SEO is considered organic or non-paid.

Rush UK also approached us to ensure that both of their strongest marketing channels were working to full effect. Through Optus’s meticulous processes we were able to build an account which used the budget to it’s full potential. We identified new search terms weekly, constantly adding and tracking new terms as well as identified new negatives to ensure that the ads were appearing in the right places. Through this monitoring we were also able to identify keywords with high conversion rates and reduced bids on more expensive terms which weren’t performing as well.

What we saw year-on-year was a massive improvement in all key metrics and only a 39% increase in cost. There was a much higher CTR (click-through rate) and lower CPC (cost per click), meaning that Rush UK are getting more conversions for their money and their budget is being used in the most efficient way. Seasonally, ad copy is adjusted to better tailor ads to users, for example during holiday periods or half terms. Combined with regular bidding optimisations, Optus have been able to create a highly efficient paid campaign to compliment the SEO. However, our work is never done. We are constantly updating, testing and finding new opportunities within the account.

Even with the multitude of issues that the site had and issues with the build, Rush UK continue to see organic success due to the SEO strategies which were put in place. The site is now switching attention to shorter tail terms for some of the newer services they are offering including some of their specialised events and fitness classes. Paid campaigns alongside SEO make up over 80% of the traffic that Rush receives and we hope to keep on expanding and building upon the successes we have seen so far. Optus Digital are proud to be working alongside Rush UK to achieve their business goals and we can’t wait to see what else the future will bring.

Want to learn more? Get in touch.