We all know that social media can cause problems for brands in the digital marketing sphere. You only have to recall Blackberry’s comical mistake which saw them tweet from an iPhone. Nonetheless, social media can also be a force for good and has a number of benefits for businesses such as raising brand awareness or humanizing your brand. Below are three of our favourite social media campaigns which reaped favourable rewards for their businesses.

This campaign by Always aimed to re-connect with its young demographic and harness the power of social media. The phrase ‘like a girl’ has previously been used as an insult to make someone feel weak or useless, but Always challenged the use of this expression by creating a video in which people were asked to do things ‘like a girl’ such as running, fighting or throwing. While women, boys and men reinforced the insulting stereotype of acting ‘like a girl’, prepubescent girls challenged it through trying their absolute best. A range of methods such as paid social and influencer outreach were used to spread the video like wildfire across the social web. In order to spark conversation and drive engagement on Twitter, women were encouraged to tweet about the incredible things they do #LikeAGirl.

Through effective leveraging of social media, the video gained over 90,000,000 views. Always’ Twitter followers also tripled in the first three months of the campaign, while their YouTube subscribers grew by a whopping 4339%. Nevertheless, their biggest achievement was arguably transforming ‘like a girl’ into a symbol of female empowerment. 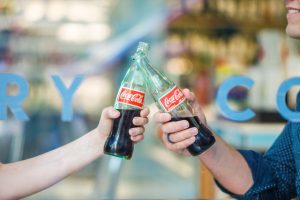 This simple, but highly effective campaign, involved replacing Coco-Cola’s famous logo with a number of popular names so consumers could ‘Share a Coke’ with those who mean the most to them. This led to a sharing hysteria and was regarded as one of their finest marketing campaigns. The choice of slogan, “Share a Coke”, acted as a powerful call-to-action, encouraging consumers to share their stories online, as well as buying a bottle of Coke to share. However, there was certainly no sharing when it came to the social media limelight.

The campaign’s statistics were impressive; not only did Share a Coke earn 998 million impressions on Twitter, there were also 235,000 tweets from 111,000 fans using the #ShareaCoke hashtag.

In celebration of the launch of Trips, their new product at the time, Airbnb decided to create a social media campaign that embraced Facebook Live. This led to a 24-hour live feed called We Are Here which was filmed in six cities across the world. Through a unique first-person lens, audiences were able to immerse themselves in a plethora of cultural experiences such as live street dance in Seoul or authentic Venezuelan cooking in Miami.

In total, the 6 live streams from around the globe gained 6.2 million views. Furthermore, engagement and views from a number of countries helped to launch their new product.

All three campaigns show how social media can strengthen both your brand and relationship with target consumers when used effectively. And with the vast number of social network users in today’s world set to increase even further, it is a platform that simply cannot be ignored by businesses. Just make sure you avoid following in Blackberry’s footsteps!